Weather-wise, it’s been an amazing summer here in the Twin Cities. I definitely see the sun much more often here than I did in NE Ohio, which is important to me. I swear I suffered from SAD in all our time there. I did some research. According to NOAA, on a “RANKING OF CITIES BASED ON % ANNUAL POSSIBLE SUNSHINE IN DESCENDING ORDER FROM MOST TO LEAST AVERAGE POSSIBLE SUNSHINE,” found here, Cleveland ranks below 50% at a mere 49%, whereas the Twin Cities ranks a respectable 58% and the gold standard in my formation, the D/FW Metroplex, ranks a lovely 61%. It hasn’t been too hot this summer in the Twin Cities, though we’ve had some nice hot days, and there hasn’t been too much rain. Right now, the windows are open; it’s breezy and sunny; wind chimes can be heard; it’s lovely.

We’ve done our best to get to know our new/old home again, and are thrilled by all the Twin Cities has to offer. We’ve ridden the amazing light/commuter rail system to a Twins game. 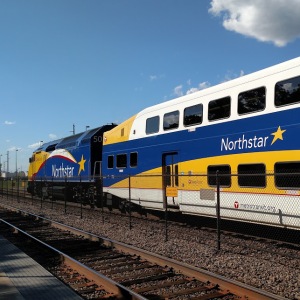 We’ve been to a Saints game in their beautiful new downtown St. Paul stadium during this record setting season. 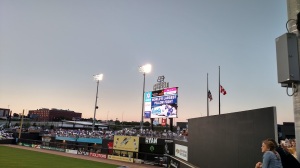 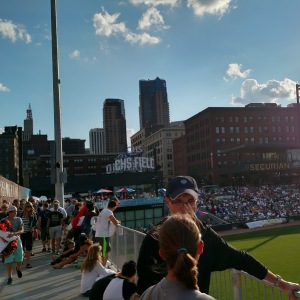 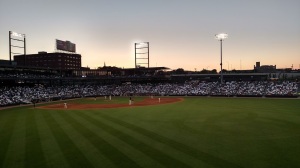 We’ve been to the amazing MN Landsape Arboretum: 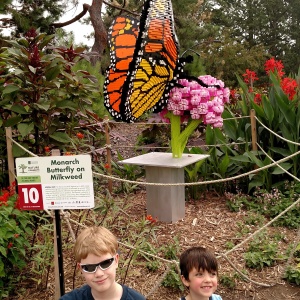 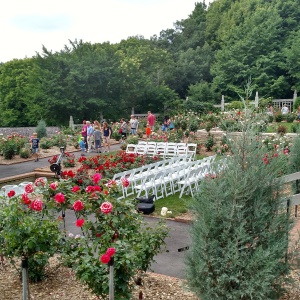 We went to the Stone Arch Bridge Festival and caught this amazing shot of downtown Mpls.:

We hung out downtown a bit including on Nicollet Mall:

We met Kirsten’s old Gordon roommate and her family and borrowed their kayak:

We checked out the amazing new Minneapolis Central Library: 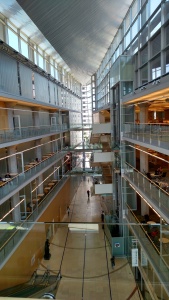 We spent time at the Minneapolis Farmers Market (though Kirsten prefers St. Paul’s for its organic/local options):

We spent time at the awesome Elm Creek Park for Nathan’s birthday: 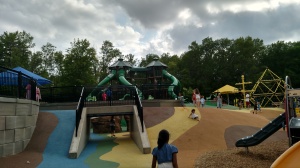 We went to a Wolves scrimmage and saw their draft picks in action:

We took the kids out to check out the Maple Maze:

…and even caught sight of a deer or two on the trail near our house: 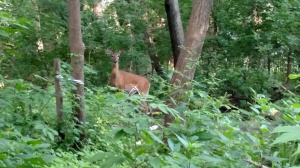 So we’ve done our best to get reacquainted with our new/old home and continue to be amazed by what a truly progressive community that engages in regional planning and cooperation can do.  We’re fortunate to be back here and excited about the opportunities being here will afford.

Of course, that doesn’t mean it’s all sunshine and giggles now that we’re back.

Our exit from OH was painful in ways varied and numerous. The financial pain will take a good long while to recover from. The Twin Cities are wonderful in all the ways just named above and more, including being economically healthy such that our income has gone up a fair bit; that said, we lost tens of thousands of dollars on our house in OH including unexpected thousands at the end just to barely make it to a completed sale, thousands we didn’t have in the first place. We had to exhaust every bit of retirement savings (and not for the first time) and had to borrow from amazing and wonderfully generous friends and others just to get here and get into a place (rental) of our own. It will take years to recover, and our chances of owning a home again aren’t great, at least not any time in the next year or two. This all is solidly in the domain of “first world problems,” but it still feels hard, whether it should or not.

Moreover, the events of the past year+ leading up to our return to MN are deeply painful and, when “prodded” about them as we unfortunately recently were, those wounds are still quite raw. I left my longtime education job a little while before leaving OH under quite a bit of duress and with some painful assaults on my character. I chose to leave, but then was made to do so “quietly” without a chance to frame my exit in my own way. The same thing happened as we likewise exited our former faith community there just before leaving OH altogether- the same painful character assaults (but much more so in that case), the same exit without much of a voice.

And that’s not even the half of it. Much of the rest isn’t appropriate to share in this space, but suffice it to say it’s been a tough few years. There’s a lot of work to be done just to heal and recover, to figure who we are (here) again and settle into roles and rituals that are meaningful and life-giving. Being here isn’t exactly stress free, unfortunately, what with (extended) family drama and no small bit of caregiving to do, especially for Kirsten. Still, we’re glad to be here.

The sun’s shining at least, or at least there’s a 58% chance it will.