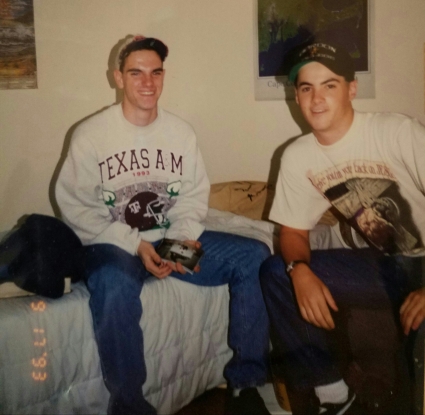 My freshman year college roommate wrote me an email on the eve of yesterday’s inauguration that clocked in at just under 4,000 words. The basic gist of his argument in all those words seems to be that:

“label conservative Christians as ‘fundagelicals’, rail against well-intention(ed) Jesus followers who disagree with socialist liberal political positions and mock them for completely missing the point of the gospel message, label every Trump supporter as racist, publicly shame any Christian who proudly supports Israel because you read an ALJazeera article,  devote a majority of a blog to try to see how you can survive thanksgiving with Trump-supporting in-laws, tweet and retweet 50 times  everyday with cynicism, hatred, and intolerance of those who disagree with your worldview, and see yourself as…someone who proudly resists a government that hasn’t had a chance yet…and to do all of that using very selective, theologically liberal biblical hermeneutics to make your case and claim the moral authority and high ground while at the same time subliminally (usually not directly) shaming every evangelical Christian…………… it says an awful lot more about the dangerous place you are in instead of the morally indefensible place you claim the ‘other team’ is living in.”

He wasn’t done, though. He adds that again from his perspective I “…can often come across as a self-righteous, hate-filled, borderline agnostic, ideologue who sits in judgment of conservatives, moderates, black and red-letter bible Christians (as opposed to only red-letter ones), meat-eaters, and anyone who is not willing to admit their white guilt and give reparations to every minority in our country….even though it’s not our country hence your USAmericans monicker.”

“flip the script to inspiration devoid of antagonization. I know it’s difficult to do that in this new administration but trust me, there is a better way to speak truth to power. The easy way is to keep reading alt left propaganda, get yourself all worked up, retweet 150,000 quotes and articles a day, resist the oppression of whatever it is that upsets you, carry around your white guilt as you live in suburbia, and spend your days miserable reading alt left books from progressive-only bookstores, written by left-wing authors. That’s actually the easy thing to do. The hard way to bring real change I believe is by inspiring a generation of people to the true gospel; the life, teachings, death, resurrection, red letters, and black letters of Jesus.” He says that I should inspire people “…by giving as much credence to the world of politics as Jesus did…not much. The Kingdom was all about speaking truth to power on a different level. Let the Essenes and Barabbas deal with trying to take down the oppression of Rome. Jesus’ speaking truth to power looked so different from Brian Zahnd…’s worldview.”

Phew! That’s a lot to digest, and I don’t even know where to begin to respond. What I don’t want to do is get into an online argument. I’ve been in more than my fair share of those, and they never, ever end well, but on a couple of occasions they have ended relationships. So, although it’s as tempting as the sweets I’ve been consuming much too frequently of late, I will do my best to resist the urge to defend myself, to take his points one by one and show from my perspective why he’s misunderstood me (there’s probably a lot of that) or why I believe whatever position I’ve taken or acted on is one that is as consistent as I can muster with my stated desire to follow Jesus. Some of what he said above is (needlessly) incendiary, whether he meant it to be or not. Nevertheless, I believe in his own way that he means well. So I’ll assume the best and instead of defending myself, what I will do is simply state, as clearly and briefly and in as straightforward fashion as I can, what I believe and why I do what I do. I think I’ve done this before, but lest there be any confusion, here goes:

Despite lots of very compelling reasons not to, I still want, and am trying, to follow Jesus. I know several smart, loving people who have tried to do the same and concluded that they cannot. As I keep saying, their stories aren’t over; so who knows what will happen with them in “the end?” I bring them up because I can relate to them and I respect their reasons. If you want to know more about this, I’ve written about it extensively of late. Just read my last several posts. For my part, “as for me and my house, we will serve the Lord.” I want to do this; no, I am compelled to do this, because somehow I still believe that as much as I may try (and fail) to hold on to Jesus, I believe deep down that Jesus is still holding on to me. Among the “prosperity gospel” preachers Trump gathered to pray for him as he was inaugurated yesterday, one of the other religious leaders (I don’t remember which one) prayed that Trump, in office, would “be his best self.” That’s one of the few sentiments from yesterday’s proceedings that I can support. I believe, and it has been my experience, that only as I try to closely follow Jesus am I ever truly my best self. It as at the foot of the cross, that great playing field leveler, that I see myself as I truly am (broken but healed), and more importantly, see those around me and around the world for who they truly are (God’s beloved children whom I am to love whether I consider them friends, neighbors, or even enemies). So I am trying, still, to follow Jesus, now well over the threshold of my fourth decade. In many ways that is no small feat these days. I’m not proud; I am grateful. I know, however, that I may not be following Jesus very well.

Even so, there are some basics about following Jesus that have become non-negotiable. I’m glad for this too. Among my “non-negotiables” is a willingness to be certain of very little. This willingness has been crucial to my ongoing relationship with Jesus. I used to be certain about various things that I thought were necessary for faith, like my former certainty that the Bible was inerrant, for example (it’s not). I used to be certain that Jesus was, as I’ve long now said, “a white Anglo-Saxon U.S. male protestant that shopped at the mall, lived in the ‘burbs, and spent his day pursing the American dream” just like most other people I used to know. Little of that, it turns out, is true. I used to be certain that following Jesus was “as American as apple pie” and that doing so, therefore, meant that following Jesus went hand-in-hand with being a “good (white) American,” that doing so meant being patriotic in the U.S. flag next to the “Christian” flag in houses of worship kind of way. According to this way of thinking that I used to be certain was the “correct” way, following Jesus was about following the rules of “checklist Christianity” (again, this is well-trod ground for me on this blog). Included in those rules were a whole bunch of “do’s and don’ts:”

This list of rules could go on and on. My point is that the rules were the focus of the kind of “Christianity” I grew up with, and they extended to belief, which is to say that some of the rules dealt with lending intellectual assent to a series of propositions about God and the Bible. Anyway, if you could “check off” all the rules, you were “in;” you were a “good Christian.” Over time, however, and largely through my own experience, I’ve come to understand that this way of trying to follow Jesus is no way at all, because it’s not really about following Jesus at all. It’s about following the rules; it’s about imposing a new “law,” when in fact Jesus came to put an end to the law. It’s why I now say that “rules are for relationship.” Read Mark 2. It’s literally all about Jesus and his followers breaking all kinds of rules (ones in the Bible, no less) in order to show that they are a means to an end, not the end. Thus, the rules point us in the direction of right relationship, but they’re a poor substitute for it. And that’s just the thing, too many would be Jesus followers I know are willing to substitute the rules for Jesus. That is what I would contend is the “easy way.” The hard way is basing one’s faith on a relationship with a living God who is always on the move, always to be found on the margins, loving and including those that we so often do not. As Pierce Pettis sang, “I can’t go with you and stay where I’m at.” As All Sons and Daughters sing:

My point obviously is that most of those things I used to be so sure of I simply am not sure of any longer. As always, here I am reminded of “my” teacher and mentor (not personally of course) Frederick Buechner, who says:

Lately I’ve had a few more bad days than not, but I remain sure that “he who does not love remains in death,” and that “Jesus is the Word made flesh who dwells among us, full of grace and truth.” I’m resolved to know these truths and “little else,” for fully living in response to them would take a lifetime. Again as All Sons and Daughters sing:

Or, as Paul put it: “I resolved to know nothing while I was with you except Jesus Christ and him crucified.” Living in love with a living God who is always calling me higher and deeper, more fully into my best self, more fully into right relationship with God and with my neighbors, friends, and enemies near and far- and with God’s good earth- means showing up for racial justice and engaging in action and awareness in regard to it; it means speaking truth to power whether it is that of Barack Obama or Donald Trump or Wall Street or Caesar. Declaring that Jesus is Lord means saying that Caesar (or Obama or Trump) is not. Living that out is messy and hard, but necessary, and very political in fact. As usual, Rod White said it better than I could:

“OK. I voted. To paraphrase Paul on both his prophetic and practical sides: In Christ there is no Republican or Democrat; Jesus is Lord. In the voting booth I voted to bring as much justice as I could with my measly vote. Now back to the everyday transformative work we do…with joy.”

In fact, his whole post about the election as a “whitelash” is instructive. I encourage you to read it. Again, for my part, if acting in the voting booth and in my social media posts to bring as much justice as I can with my measly vote and my measly voice makes me look like a “self-righteous, hate-filled, borderline agnostic, ideologue who sits in judgment of conservatives, moderates, black and red-letter bible Christians (as opposed to only red-letter ones), meat-eaters, and anyone who is not willing to admit their white guilt and give reparations to every minority in our country….even though it’s not our country,” then so be it. Lord willing, my more “liberal” and “left-ish” friends will find me equally offensive. If I follow Jesus well and closely enough, what will come through most clearly is love for neighbors near and far and friends and enemies alike. To the extent that my online presence does not make that clear, I repent and beg forgiveness.