My dog died today; so I’m not much into the nonsense on Facebook. I did find myself inexorably drawn to the Facebook “get sympathy now” button, which I pushed a couple of days ago when I posted a link to the photo album I made for Coho along with a few words about the fact that she had cancer and a “hard choice would be made soon.” That hard choice came today. I can now say I’ve been present to four beings as they breathed their last, having finally succumbed to cancer. The first three were people, of course, but Coho’s death did not fail to elicit emotion. The end for Coho came peacefully as I held her, her head in my lap. It came pretty quickly too, but I had time before the sedative and euthanizing agent were given to say goodbye for as long as I liked. She’s come to know the vet’s office, and was scared when we arrived. She repeatedly went under my legs and tried to position herself with me between her and the vet staff. Finally I just got down on the floor, which she always considered an invitation to come over and be petted. I held and petted and talked to her as they placed the IV and then later, gave the drugs. I held it together, too, until the deed was done and they left, again inviting me to “take as long as I needed.” The hard parts came when her eyes wouldn’t close, then again when I tried to move her head out of my lap and onto the blanket on the floor so that I could finally stand and her head just flopped like the lifeless thing it then was, and then finally again when I collected her collar and leash. The leash usually jingles when you handle it, and like Pavlov’s dog this always produced a response, in Coho’s case excitement about going outside for a walk or drive. The stimulus-response cycle broke down this time, as Coho was no longer there behind her still open eyes to be excited about whatever the jingling leash would portend.

Coho was a great dog. We got her as a pup from the Animal Humane Society of Summit County in OH. We only went there to “check things out” and weren’t planning to adopt right then, but when we met her, I couldn’t say no. Coho had been neglected and so was a bit of a fearful dog. Things that scared her included: vacuum cleaners, laundry baskets, sudden noises, small-couldn’t-hurt-a-flea dog treats being tossed to-not at- her, and the list could go on. Most of the time it was endearing. Here she is, afraid on Christmas morning of a bone bigger than she was:

She was great with the kids (and me!). She didn’t mind being made to wear jammies, or hide out in a couch cushion fort, or snuggle with a stuffed bear, or wear sunglasses, etc.:

She was great especially with mischievous-even-as-a-baby Nathan:

She handled car trips and cross country moves like a pro, even when there was hardly room for her:

….and she was a great running buddy: 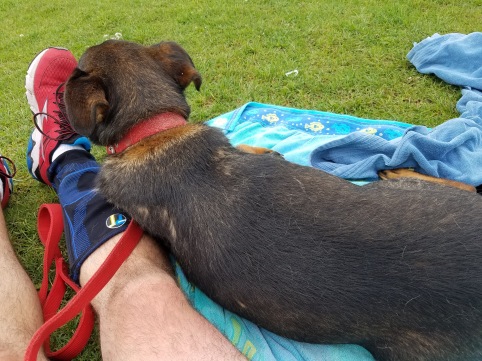 We had a choice, of course. We could have exhausted a lot of financial resources to extend her life. The first step would have been having her leg amputated, and then probably some chemotherapy. The cost was prohibitive, though, and quickly- much more quickly than we expected or were prepared for- the pain and loss of bone in her shoulder caused her to stop using altogether the leg that would have been amputated. As soon as I realized that we were then asking her to live as if she didn’t have the leg anymore without the benefit of the cancer being slowed down or stopped for a time- the benefit that might have come with amputation- I knew we had to act.

This act- one of kindness, I hope, even love- raises a lot of questions, but I don’t have the capacity to deal with them today. Coho was part of our family for over a decade, and while she’ll always be with us in some way, today our family got undeniably smaller.